Running a successful restaurant is a 24/7 commitment and much of the work takes place before the grill is fired up and the first order of the day is placed.

“There has to be something a little wrong with you to want to do this for a living,” said Ron Hill, owner of Queen’s Café on Victoria Street South. “You have to love it and we do. You have to have a passion for sure.”

Hill shares that passion with his life and business partner Tammy Hsieh and all their hard work appears to be paying off.

“We’ve had to turn people away because we’re not big enough to handle the volume that’s been coming in,” said Hill. “We’ve had some concerns about that.”

The restaurant’s popularity has been fuelled by word of mouth and positive online reviews, but Hsieh has a more direct way of measuring customer satisfaction.

“We don’t really look at the reviews,” she said. “What makes me most happy is seeing the empty plate coming back to the kitchen – every single dish. That makes us proud. Yes the reviews are important but an empty plate won’t lie.”

Hsieh was born in Taiwan and earned a degree in hospitality and marketing at Johnson and Wales University in Providence, Rhode Island.

Hsieh and Hill have been together since she moved to Guelph with her son and daughter in 2014.

Hill was born in Guelph. He has a young daughter as well and has lived and worked in the area all of his life.

“We moved around quite a bit when I was young,” said Hill. “We lived in Fergus and Elora. I did go to school here then I went to George Brown for culinary school.”

Queen’s Café is the second restaurant Hill and Hsieh opened together.

“We did own a restaurant in Waterloo prior to this with a different name,” said Hill. “We were there two years. We wanted to move back to Guelph because this is where we’re from.”

They sold the Waterloo restaurant in November 2017 and opened Queen’s Café in September 2018.

“There are a lot of advantages to being here,” said Hill. “We have a liquor license now and though we’re not really fine dining, we do nicer entrees and that has always been my little niche. Over there we were just doing breakfast and lunch. It was fast. Out here it’s a little nicer, more upscale, which is what we wanted.”

They completely renovated the restaurant to provide seating for 32 diners and are opening a patio in the back this spring. They’ve had a lot of help and support from friends and family including Hill’s mother Margaret Smith and her husband Sandy.

“He actually made that thing on the wall there (a 3-D silhouette of a dining couple) and made the coat rack too,” said Hill. “He’s a pretty handy person to have around.”

Hsieh came up with the restaurant’s name.

“We’re on the corner of Elizabeth and Victoria so, we have two queens here,” she said. ”That’s why we call it Queen’s Café. Not bad eh?”

When the restaurant is closed they make regular trips to the Guelph Farmer’s Market and St. Jacobs to get fresh ingredients for their recipes.

“Any good chef should try to use local as much as possible and that is what we try and do,” said Hill. “I would say 90 per cent of our products here are at least Ontario. We use Trotters downtown for their bacon and pastrami. We have a couple Ontario wines and a couple local beers. Royal City is pretty good selling beer here. It’s just down the road.”

They are thrilled with the success of their little restaurant and have no plans to get bigger or open another location.

“The bigger restaurant we’ve got the more energy we have to put in and then there is no life (outside) at all,” said Hsieh. “Now it is within our control because it’s our sauce, our dressing, our stock – everything is house made. That is a lot of work and passion just cooking those ahead and doing the presentation for the table. So, I’ve got to enjoy this mini, tiny restaurant.” 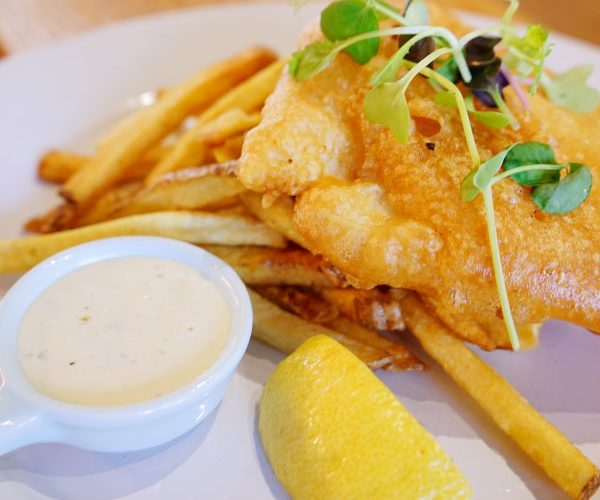